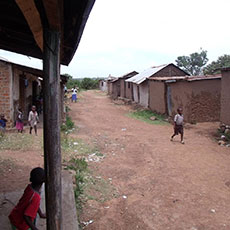 Rob and Jane were taken to this small Kenyan village to visit a livelihood project started by a young primary school teacher on the advice of our 5000Plus partner Kennedy. In the shade of a tree they introduced the vision to some 12 villagers encouraging them to find their resource however small and begin to use it to start their journey out of poverty. In her diary Jane wrote at that time: "It seems a God forsaken place. It has a dark feel to it and is incredibly dry and underdeveloped...". Six months later they returned to visit a widow with 2 teenagers who having heard of the training, decided to see if she could increase her income. Plister, saving a little money from her cassava harvest, had bought 6 chickens and a cock and now had 70 which she was selling for meat to the local market. In that six months she had increased her income twofold. Today Plister has many different livelihood projects including running the village pharmacy. She has been trained as a 5000Plus community volunteer and has been instrumental in empowering many others to begin their own projects. She says that when she was poor she was looked down on but now she is respected and honoured in her community. Dominic is another who when he met Rob and Jane under that tree on their first visit said in his own words "I had nothing and was doing nothing" but he began something small growing vegetables in his ‘shamba’. He progressed starting a fish farm which has been very successful, so successful that he was copied by his neighbours with the result that today there are seven fish farms with dealers coming with refrigerated lorries to take their produce off to markets. In Olasi there are now over 170 income generation projects started as a result of the 5000Plus training, 5 small savings and loan groups and 9 trained local community volunteers. This truly is a community being transformed. 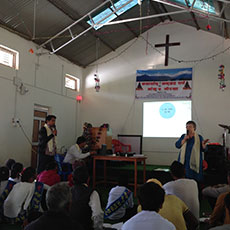 In this beautiful Nepali valley, since hearing the 5000Plus vision many pastors have started their own livelihood projects to help sustain their families and enable them to be in Christian ministry. They have passed on the 5000Plus teaching and have fostered a “can-do” attitude in their villages and have encouraged their communities to increase their activities which produce family income. The sharing of skills has enabled people to make things such as the large baskets that are carried on people's backs filled with grain or vegetation for animals. Neighbours have been motivated to work together for marketing their produce and other goods. This enables them to sell in more distant places through shared transport costs. Small shops have been started by home-makers as a sideline to bring needed products closer to customers thereby increasing the local economy.